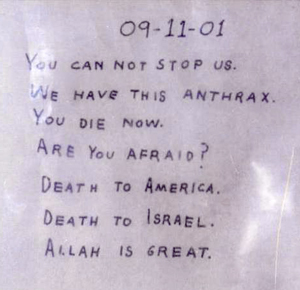 Bioterrorism—A bioterrorism attack is the deliberate release of viruses, bacteria, or other biological agents used to cause illness or death in people, animals, or plants. In the hands of the wrong people, materials intended for legitimate scientific, medical, or commercial use have the potential to harm large numbers of people.Although the anthrax attacks in the weeks following the 9/11 terrorist attacks focused national attention more acutely on our potential vulnerability; bioterrorism is not a new phenomenon. Throughout history, individuals and groups have used it as a weapon against both military and civilian populations.

In October 2001, bioterrorism in the U.S. became a reality again when four letters laced with anthrax were sent through the U.S. Postal Service. The attacks resulted in the illness in 22 people, the death of 5, and fear and anxiety in millions of others. The cost of decontaminating offices that were exposed totaled over $23 million.

A former Aryan Nations member illegally obtained a bacterium that causes plague (Yersinia pestis) by mail order. As a result, Congress passed Section 511 of the Antiterrorism and Effective Death Penalty Act of 1996 requiring HHS to publish regulations for the transfers of select agents that have the potential to pose a severe threat to public health and safety (Additional Requirements for Facilities Transferring or Receiving Select Agents, 42 CFR Part 72.6; effective April 15, 1997).

Following the anthrax attacks of 2001 that resulted in five deaths, Congress significantly strengthened oversight of select agents by passing the USA PATRIOT Act in 2001 and the Public Health Security and Bioterrorism Preparedness and Response Act of 2002 requiring HHS & USDA to publish regulations for possession, use, and transfer of select agents (Select Agent Regulations, 7 CFR Part 331, 9 CFR Part 121, and 42 CFR Part 73; effective February 7, 2003).

On July 2, 2010, President Obama signed Executive Order 13546 entitled “Optimizing the Security of Biological Select Agents and Toxins in the United States” that directed the Department of Health and Human Services (HHS) and the Department of Agriculture (Agriculture) as a part of their ongoing review, to tier, and consider the reduction of the select agent list; and establish physical security standards for select agents with the highest risk of misuse. A final rule published on October 5, 2012 designated Tier 1 select agents, reduced the number of agents on the select agent list, and established physical security and information security standards for Tier 1 select agents. The subset of select agents designated as Tier 1 present the greatest risk of deliberate misuse with significant potential for mass casualties or devastating effect to the economy, critical infrastructure, or public confidence.

Links with this icon indicate that you are leaving the CDC website. For more information on CDC's web notification policies, see Website Disclaimers.

We take your privacy seriously. You can review and change the way we collect information below.

These cookies allow us to count visits and traffic sources so we can measure and improve the performance of our site. They help us to know which pages are the most and least popular and see how visitors move around the site. All information these cookies collect is aggregated and therefore anonymous. If you do not allow these cookies we will not know when you have visited our site, and will not be able to monitor its performance.

Cookies used to enable you to share pages and content that you find interesting on CDC.gov through third party social networking and other websites. These cookies may also be used for advertising purposes by these third parties.

Thank you for taking the time to confirm your preferences. If you need to go back and make any changes, you can always do so by going to our Privacy Policy page.